How to turn on SLAM mode

Do not try to calibrate for SLAM against a wall, corner of a room, or flat surface

How to capture SLAM data

When calibrating SLAM indoors, start the unit facing as many objects across a room as possible. Starting from the corner of a room facing the open field of view may work best. How to capture SLAM data

SLAM processing relies on the LiDAR sensor and the inertial measurement unit (IMU) to estimate the location of the sensor ("trajectory") as you move.  Creating a point cloud using SLAM processing can produce very accurate results but it is very dependent on the subject of the scan and how the operator scans the subject area.

"Drift" is your enemy with SLAM processing. Drift is when sensor movement occurs in real life, but the movement cannot be accurately determined using the data collected. During this movement mismatch between real-life and sensor data the processed trajectory (and therefore the resulting point cloud) will drift away from reality. This drift has two main causes:

The most common cause of sensor drift occurs when the LiDAR sensor is pointed at a featureless object. This can happen when a directional laser (like the R2A) is pointed at the sky, standing too close to and pointing directly at a flat wall, or getting into too small of a room with little or no objects. Under this situation the SLAM processing simply doesn't have enough information to detect movement accurately.

There is some degree of micro-drifts that occur over time when estimating your position using SLAM. As the length of your scan increases the micro-drifts can add up.

Now that you know the two main causes for "drift", let's look at technics for Drift Mitigation.

Environments with multiple 3D structures and objects will help reduce the amount of drift. Keeping this in mind,  featureless deserts like plain stairwells, hallways and tunnels would not be good candidates for SLAM.

Another key is to understand the sensor you are using. Some sensors are directional (R2A) and others will scan a 360 field of view (R360). Both sensor types require a unique way of scanning.

For a directional scanner you will need to pay very close attention to avoid pointing the sensor onto a blank surface (wall or sky are the most common offenders).  Below are some techniques for collecting data with a directional LiDAR sensor: (note that the arrows are how you walk and the cameras illustrate which way the sensor should be aimed) 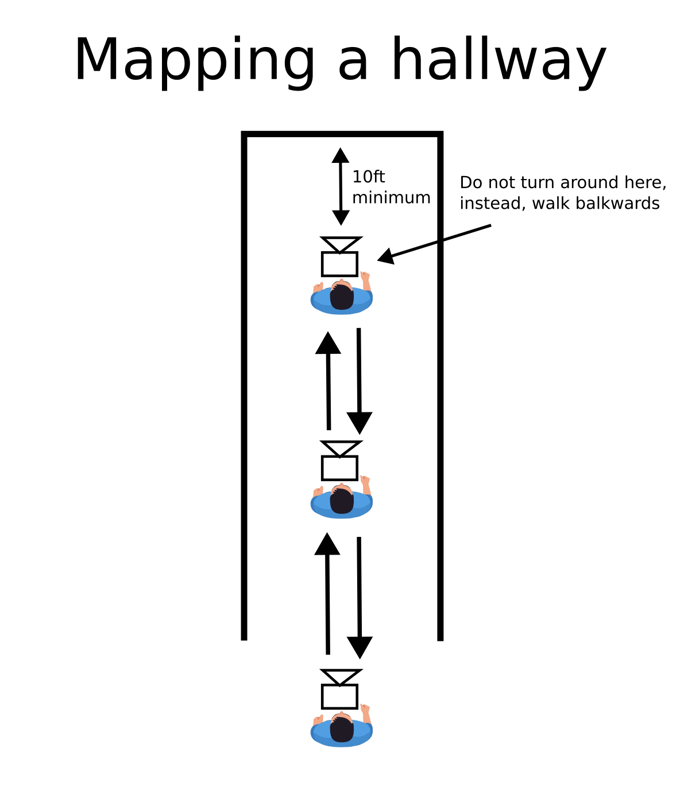 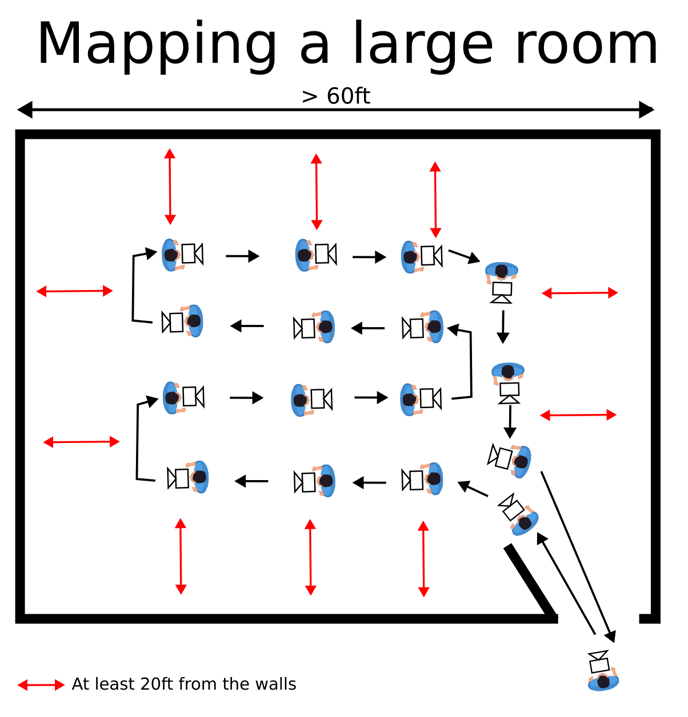 When using a 360 LiDAR you are much less likely to run into drift from pointing at a featureless wall. This is because even if you get close to the edge of a room, the 360-degree field of view of the sensor allows SLAM to see and localize using features in the rest of the room.

However, when using a 360 scanner be sure the operator's body is not obstructing the scan. The sensor needs to be angled in such a way as to get a full 360 degree field of view.

Other ideas on good feature collecting:

As mentioned above, drift is also caused by the accumulation of micro-errors in the estimation of the sensor's trajectory. One aspect of this type of drift that we can exploit is that it accumulates over time. This means that earlier portions of a scan will contain less accumulated drift than later parts of a scan. Therefore, if we are able to tie the same object from an earlier part of a scan to a later part of the scan we can measure the amount of accumulated drift and apply corrections to the trajectory. This is called loop closure!

As you scan an area, loop back through a previously scanned area. The smaller the loops, the less accumulated error, and the better the loop closure will do at refining the trajectory between the beginning and end of the loop. Just be sure the loop closure portion overlaps by at least 5 meters.

Other ideas on good Loop Closure:

Do not capture more than 30 minutes of data at a time. The Rock Cloud will stop processing at 30 minutes.

The SLAM scan will not include data within 2 meters- so give some distance between yourself and your scan area. The scan will reach out about 15-20 meters.

How to Process SLAM Data

Learn how to re-project SLAM data from meters to feet.

Powering your R2A or R360 while in SLAM mode.