What is Drone Photogrammetry?

Drone photogrammetry is a technique that uses aerial photographs taken by drones to measure and map physical features on the ground. 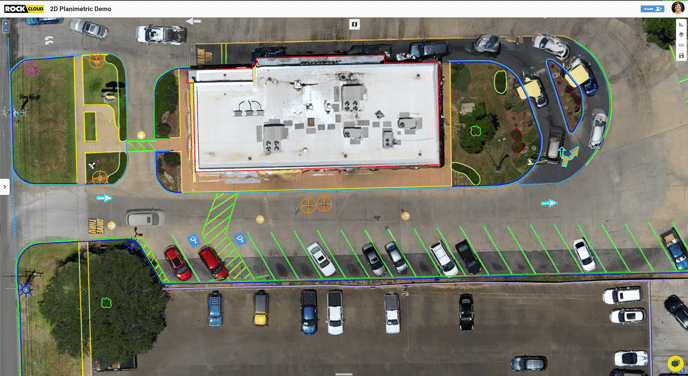 Using drone technology to capture orthophotos has revolutionized the surveying industry, allowing surveyors to quickly and accurately gather data and create deliverables such as planimetrics/linework.

The drone photogrammetry process begins with flying a drone over the area of interest. The drone captures a series of overlapping photographs, which are then loaded into specialized software. This software uses algorithms to automatically identify and extract features from the photos, such as points, lines, and surfaces. The extracted features are then used to create 2D and/or 3D models of the area.

One of the critical advantages of drone photogrammetry is its ability to quickly and efficiently gather large amounts of data. Traditional surveying methods, such as ground-based surveys, can be time-consuming and labor-intensive. With drone photogrammetry, surveyors can cover a larger area in a shorter time while gathering more detailed and accurate data.

An orthophoto, also known as an orthoimage, is a type of aerial photograph that has been geometrically corrected to remove the effects of camera tilt and terrain relief. This means that the photograph has been adjusted so that features on the ground appear in their true, planimetric positions rather than distorted by the camera angle or terrain.

Orthophotos are created using photogrammetry. In the process of photogrammetry, the overlapping photographs taken by the drone are loaded into specialized software, which uses algorithms to identify and extract features from the photographs. These features are then used to create a 3D model of the area.

Once the 3D model is created, the software can then use the geometric information contained within the 3D model to adjust the perspective of the photographs and create an orthophoto. This process is known as orthorectification.

An orthomosaic is a composite image made up of multiple, geometrically corrected aerial photographs that have been stitched together to cover a larger area, typically tens or hundreds of square kilometers. An orthomosaic is made up of multiple images and it has a variable scale, meaning that the resolution of the image changes across the image. The resolution of an orthomosaic can be higher in certain areas and lower in others, depending on the distance between the camera and the ground.

An orthomosaic can be thought of as a patchwork of multiple orthophotos. The images are processed, aligned and blended together to create a seamless image that covers a large area. This makes the orthomosaic useful for large-scale applications such as urban planning, natural resource management, and disaster management.

Photogrammetry empowers surveyors to create deliverables such as planimetrics/linework. Planimetrics are 2D maps that show the location, shape, and size of physical features on the ground. Linework is a representation of the boundaries and edges of physical features. Both of these deliverables can be used for various purposes, such as land-use planning, engineering design, and construction.